PANAMA CITY, Fla. — Florida is not planning another black bear hunt any time soon. But they're not taking the option off the table to manage bears either.

The new plan shows the Florida black bear population has grown to an estimated 4,050 bears, a 50 percent increase in population from 2002.

The seven sub-populations of bears have also grown. In some cases, the sub-populations are so large that bears can potentially interact with other sub-populations. That's good for genetic diversity, important in growing a healthy species, FWC says.

Scientists think the bear population, under current practices, could reach 11,000 by 2026.

The goals of the plan include:

To do that, FWC listed several management options, offering no preference on one option over another.

Those options include translocation (moving bears from one sub-population to another), habitat preservation, continuing the BearWise program and educating the public on bears.

Regulated hunting is also included in the bear management plan. FWC officials say they were not currently advocating another bear hunt like the one held in Florida in 2015.

The bear hunt caused an outcry, and Floridians remain divided specifically on hunting bears, although Floridians overall support hunting, according to a survey conducted by FWC and included in the plan.

About 75 percent of speakers at Wednesday's meeting opposed another bear hunt. FWC commissioners approved the bear management plan without setting a date for another hunt.

However, scientists stressed that the rates of growth among both bears and humans may lead to the need to "manage" the bear population in the future.

WHERE ARE THE BEARS?
Florida's black bears are largely concentrated in parts of northern and central Florida but can be found throughout the state.
The Florida Fish and Wildlife Conservation Commission has broken up the state into Bear Management Units to better track and handle the population. The bear range are the areas where bears are more frequently seen within those areas. 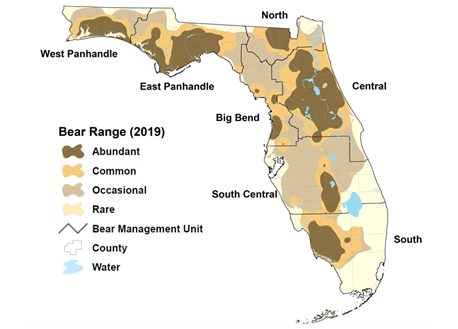 5 QUICK BEAR FACTS TO KNOW
1,198
FWC's estimated average number of bears living in the Central BMU alone. It's estimated there are more than 4,000 black bears throughout the state.
250-400 pounds
Average size of male black bears. Adult females can weigh up to 250 pounds.
80 percent
Amount of a bear's diet that comes from plants. An additional 15 percent comes from insects and 5 percent from meat.
241
Number of bears struck by a vehicle in 2018 in Florida. Over half of bear deaths caused by vehicle strikes each year occur in the Central BMU.
52 percent
The percentage of bear-sighting calls in Florida that come from the Central BMU.
REASONS PEOPLE CALL ABOUT BEARS
General Interaction
Getting Into Garbage
Property Damage
Sick or Dead Bear
Other reasons
LIVE IN A BLACK BEAR AREA? TAKE THESE STEPS
Don't feed the bears
Lock up all pet food, including bird seed or livestock feed. Don't leave human food out, either.
Keep garbage cans locked
Get a bear-resistant trash can. Some local governments have discount programs. Or keep the cans locked up and only bring them out when it's time for trash pickup.
Clean grills regularly
Bears can smell food sources from more than a mile away, so try not to leave residue on your grill.
Don't leave fallen fruit on the ground
Have fruit trees? Ripe or fallen fruit will definitely attract food-loving bears.
Be prepared to scare a bear
If you encounter a bear and are in a safe area, try to scare it away by yelling, using an air horn or whistle, or something similar.
Story re-posted from Spectrum News 13. Written by Christie Zizo